New Media Aid are serious software engineers and app developers in Hitchin, Hertfordshire (only 25 minutes from Central London) and as such realise that testing is a very important step in Android app development.

Users interact with the Android apps we develop on a variety of levels, from pressing a button to downloading information onto their device. Accordingly, we need to test a variety of use cases and interactions as we iteratively develop your app. 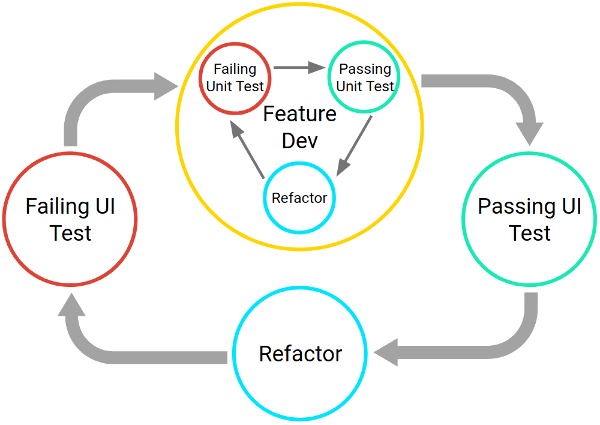 
The full workflow, as shown above, contains a series of nested, iterative cycles where a long, slow, UI-driven cycle tests the integration of code units.

Organize your code for testing

As your app expands, we might find it necessary to fetch data from a server, interact with the device's sensors, access local storage, or render complex user interfaces. The versatility of your app demands a comprehensive testing strategy.

When developing a feature iteratively, our highly experienced Android app development team start by either writing a new test or by adding cases and assertions to an existing unit test.

It's important to consider the units of responsibility that emerge as we design each new feature. For each unit, our android app developers will write a corresponding unit test.

The unit tests should nearly exhaust all possible interactions with the unit, including standard interactions, invalid inputs, and cases where resources aren't available.

Our Android app development team will take advantage of Jetpack libraries whenever possible. When we use these well-tested libraries, our android app developers can focus on validating behavior that's specific to your app.

The testing development cycle consists of writing a failing unit test, writing code to make it pass, and then refactoring. The entire feature development cycle exists inside one step of a larger, UI-based cycle.